As markets grapple with the real threat of escalating virus cases derailing the global economic recovery, the risk-sensitive Australian dollar will be keeping an eye on the September manufacturing PMIs out of China on Wednesday. The NBS manufacturing PMI will be released at 1:00 GMT, followed by the Caixin/Markit manufacturing PMI at 01:45 GMT, both of which are expected to be one of the main highlights for traders this week.

One of the factors that’s been working in the aussie’s favor in recent months has been the encouraging data coming out of China – Australia’s largest trading partner. Having come out of lockdown earlier than other countries, China is considered as being ahead of the global recovery curve and therefore its PMIs are being watched carefully for clues as to where growth is headed. The National Health Commission said in a statement earlier today that all new cases were imported infections involving travelers from overseas, in another sign that China has all but eradicated local transmissions of the coronavirus.

So far, the recovery remains on track. The Caixin manufacturing PMI is forecasted to remain the same at 53.1 as the preceding month. This reading was the biggest improvement in the health of the sector since January 2011.The official NBS non-manufacturing PMI for China rose to 55.2 in August, pointing to the fastest month of growth in the services sector since January 2018 as the economy recovers further from the coronavirus pandemic. It is predicted to fall to 52.1 in September, which may indicate a slowing recovery. The manufacturing PMI stood at 51.0 in August, creating the sixth straight month of increase in factory activity and is expected edge up to 51.2 in September. 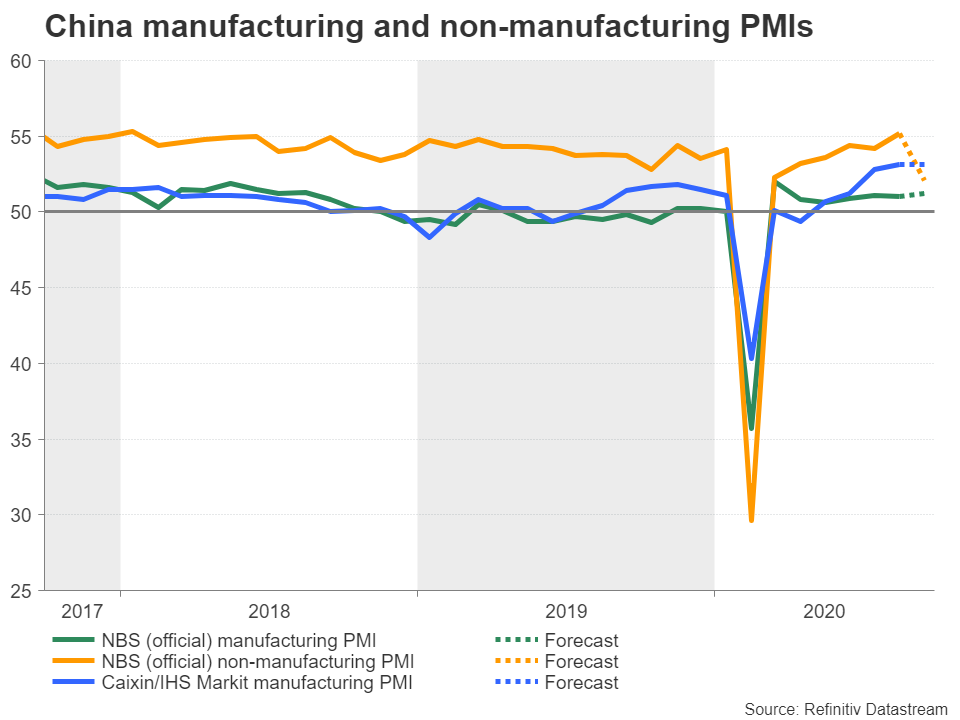 Is the recovery speeding up?

China’s vast industrial sector is steadily returning to the levels seen before the pandemic, which paralyzed huge swathes of the economy earlier this year. Industrial production rose by 5.6% from a year earlier in August, the most since December 2019 as the economy recovers from the Covid-19 shock. The economy is set to expand 2.2% this year, which is the weakest growth in three decades, having grown by 3.2% in the second quarter year-on-year. Moreover, retail sales grew by 0.5% from a year earlier in August 2020, the first month of increase since December 2019. After several months, a good sign is coming up as consumers are becoming more confident, however, the slow progress shows the scale of challenge policymakers have to get consumption to pre-pandemic level.

In FX markets, aussie/dollar has been in a strong selling phase over the last five days, reaching a new two-month low of 0.7005.

Should the China PMIs beat the forecasts, aussie/dollar might extend gains above the 0.7200 handle and the short-term moving averages. A bigger surprise in the data, may also open the door for the two-year high of 0.7412 and the 0.7490 resistance, taken from the high on July 2018.

However, with risk appetite looking fragile, any disappointment from the data could heighten concerns that the road to recovery will be a long one. Moreover, the US presidential debate may affect the aussie as well on Wednesday, as markets become increasingly wary about the upcoming elections in the United States. 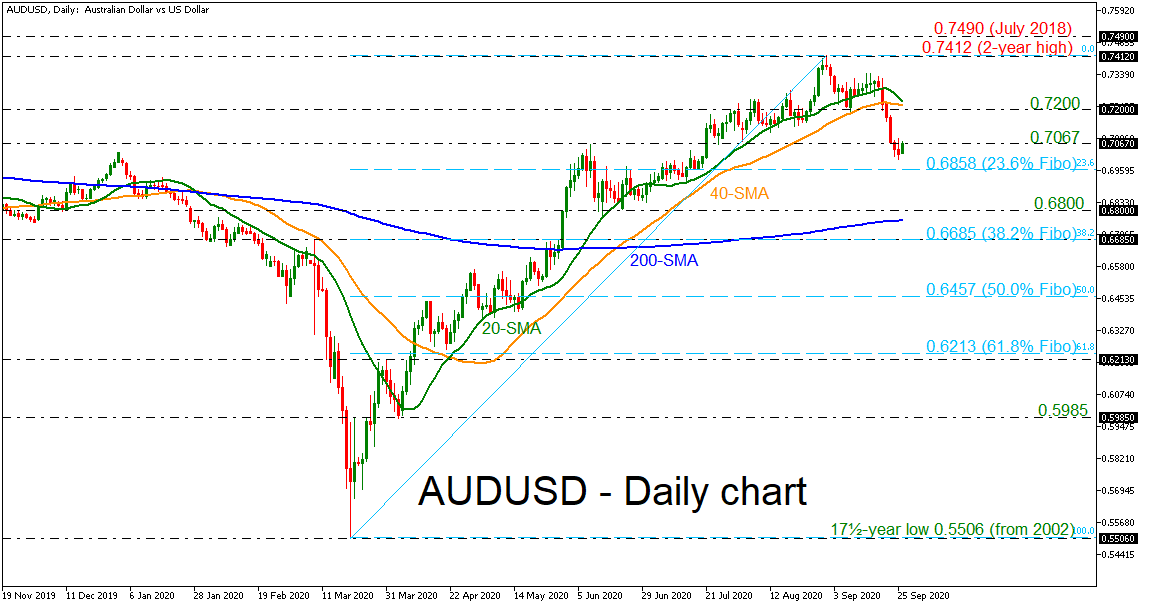 Legal disclaimer:
The material does not contain a record of our trading prices, or an offer of, or solicitation for, a transaction in any financial instruments. XM accepts no responsibility for any use that may be made of these comments and for any consequences resulting in it. No representation or warranty is given as to the accuracy or completeness of this information. Consequently, any person acting on it does so entirely at their own risk. The research and analysis does not involve any specific investment objectives, financial situation and needs of any specific person who may receive it.

It has not been prepared in accordance with legal requirements designed to promote the independence of research, and as such it is considered to be marketing communication. Although we are not specifically constrained from dealing ahead of the publication of our research, we do not seek to take advantage of it before we provide it to our clients. We aim to establish, maintain and operate effective organisational and administrative arrangements with a view to taking all reasonable steps to prevent conflicts of interest from constituting or giving rise to a material risk of damage to the interests of our clients. We operate a policy of independence, which requires our employees to act in our clients’ best interests and to disregard any conflicts of interest in providing our services.

CFDs are leveraged products. CFD trading may not be suitable for everyone and can result in losing all of your invested capital, so please make sure that you fully understand the risks involved.

Grayscale adds 17,100 bitcoin to its reserves