As the USD/MXN trades within the confines of its higher values it is becoming attractive as a breakout candidate.

The USD/MXN is mirroring the mixed sentiment being shown on global indices. After managing to hit critical support levels near the 20.82000 juncture on the 18st of September the USD/MXN has seen a strong bullish reversal higher emerge. The move upwards has destroyed resistance in its path and the USD/MXN is now testing values last traded in the middle of August.

Global risk appetite has tumbled and this has caused a bullish trend to emerge in the USD/MXN.  Resistance near the 22.58000 level looks vulnerable and if it is broken higher the next target for speculators could be the 22.75000 mark.

The last week of trading for the Mexican Peso has produced a rather steady range which may look attractive to speculators who believe the USD/MXN may be laying the groundwork for a breakout. The problem is predicting which direction this breakout may go. This highlights the abundance of mixed sentiment in the global markets which adds to the potential that the USD/MXN may actually continue to produce choppy results.

Speculators will have to gauge their sentiment carefully. If you want to add to an already cloudy landscape while trying to interpret the next move of the USD/MXN look no further than the results of Mexican equities which have produced fractional gains the past month, while still suffering substantial percentage declines the past year. What this means is that correlations are hard to prove during these troubling economic times. The current ingredients within the USD/MXN which remain strong are the US Dollar in a predominant manner sprinkled with sentiment regarding the Mexican economy its actual international commerce.

If global risk appetite remains in jeopardy short term the USD/MXN could certainly continue to find buyers. On the 4th of August, the USD/MXN was trading near the 22.76000 to 22.80000 junctures. Higher trading levels for the Mexican Peso are not out of the question if risk-averse trading continues to mount.

The resistance level of 22.58000 should be watched carefully, if it manages to hold it could produce a reversal lower for the USD/MXN. Speculators should consider limit orders to open positions and quick take profit targets to take advantage of the USD/MXN’s choppy trading which will likely continue near term.

Latin American currencies can give great price movements.
Trade them with our featured broker. 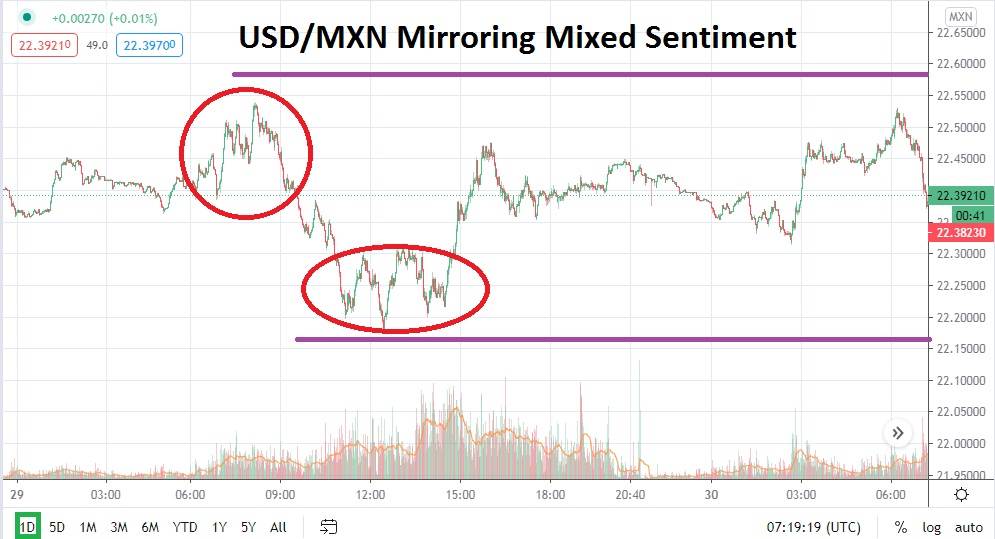