USDJPY May Be the Best Candidate for Stimulus, Traders Fade GBPUSD Rally

Trading Nation: Bitcoin surges to highest level since January 2018 — Two traders on whether it can go higher

The DAX Index continues to fuel tests of support mixed with the occasional reversal higher which is causing speculative stress.

The DAX Index has produced two solid days of sideways price action early this week. This trading essentially follows a sharp decline from the German market late last week. Speculators who are trying to trade the DAX Index by pursuing short term trends may be getting eaten alive. If you as a trader have profited the past few weeks within the German index congratulate yourself.

Global equities have become a volatile short term. Yesterday’s trading action in US markets provided another unconvincing day of results as equities lost fractional value. US future markets are indicating the opening of American equities will produce declines to start the day. The DAX Index has seen a relatively polite decline this morning, but what should worry traders who remain, buyers, is the notion that important support is being tested, and if it proves vulnerable a strong decline could ensue.

While support levels do look vulnerable and if punctured lower they could certainly spur on a rapid test of important junctures below, it should be remembered that whipsaw trading in the DAX Index short term has been violent. Traders need to acknowledge that equity indices have been ruthless the past month as they churn violently and the markets actually remain within the bullish territory. This means if a reversal higher were to suddenly emerge, technical resistances levels via trading software of financial institutions could produce fast tests of highs with the blink of an eye.

Short-term the DAX Index does feel dangerous.  However, feel is a word which doesn’t mean much factually, it is more about gut instinct. Speculators will have to seriously ask if they are emotionally ready to trade the German index and if the answer is yes it is strongly advised they use risk management tools, selling the DAX Index ‘feels’ like the right choice today short term.

Support at the 12700.00 level could prove significant if there is a decline in the DAX Index today. If this support level falters it could propel a test lower as investment houses try to determine risk-reward scenarios. There is a large gap to contemplate in values between the 127000.00 and 12450.00 levels. These junctures were earmarked on the close on last Friday near support of 12450.00 and the gap higher upon opening this Monday around 12700.00. 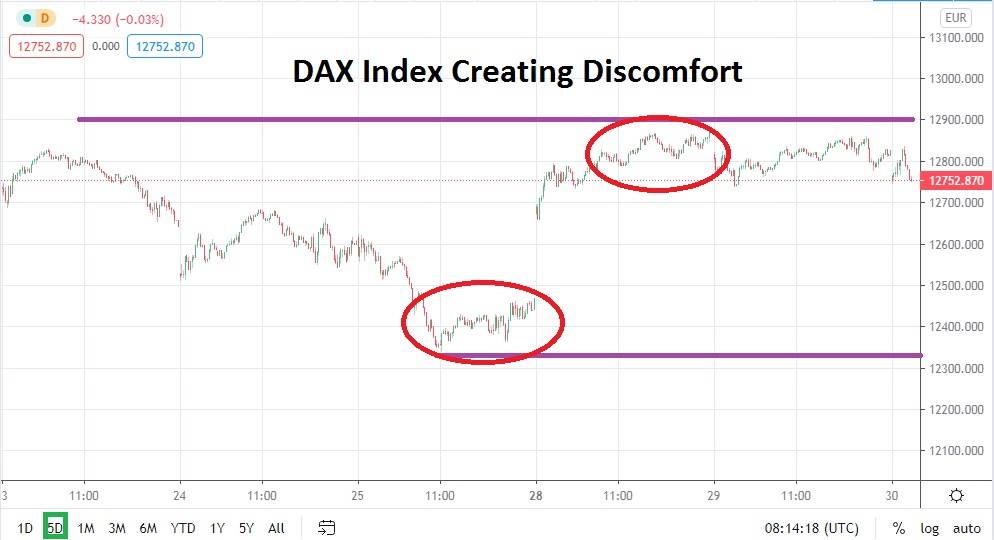 USDJPY May Be the Best Candidate for Stimulus, Traders Fade GBPUSD Rally

Trading Nation: Bitcoin surges to highest level since January 2018 — Two traders on whether it can go higher

Technical Analysis Can Be Your Friend And Your Enemy

Will FX Traders Care More About Election, Stimulus Or PMIs?

ASX 200 and Nikkei 225 Price Forecasts for the Week Ahead