Bitcoin Closes on $12K But a Wall of Sell Orders Awaits: Analyst

Within the last few hours Bitcoin (BTC) price plummeted as the U.S. Commodities and Futures Trading Commission (CFTC) charged BitMEX with facilitating money laundering and operating an illegal cryptocurrency derivatives exchange. An even larger shock occurred as authorities announced the arrest of Samuel Reed, one of the co-founders of BitMEX.

BitMEX has been the most dominant Bitcoin futures exchange for a long time, at least until March 2020 when the massive $1 billion Black Thursday liquidation pulled the price below $3,750. In recent months, new competitors like Binance Futures and ByBit have significantly increased their market share.

Although the industry expected that charges against BitMEX would come one day, the arrest of Reed is an unexpected surprise. Immediately after the news broke, BTC price plunged from $10,883 to $10,437, a 4.11% drop. 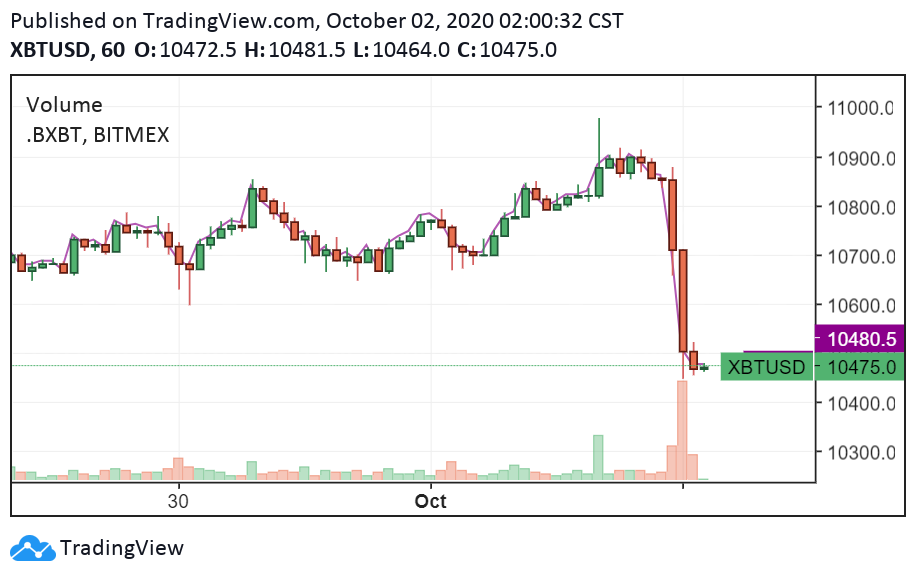 Fortunately, there are several factors that could aid the recovery of Bitcoin in the short term. The catalysts are the short duration of the current correction, Bitcoin’s previous reactions to regulatory threats, and the $10,500 support holding for the moment.

Bitcoin sees a rapid and intense fall in a short period

The price of Bitcoin declined by more than 4% in two hours, a level of volatility it does not typically see.

Usually, when Bitcoin falls with such intensity, it causes a cascade of liquidations. Since many trades in the futures market are highly leveraged, it leads to a loop of long contract liquidations, resulting in a larger fall.

This time around, open interest and the volume in the futures market is significantly lower. There are fewer overleveraged trades actively open in the market and this reduces the probability of a massive correction.

Over the years the cryptocurrency market has endured many negative regulatory actions enacted by governments across the world, but, as Bitcoin researcher Vijay Boyapati says, BTC strongly recovered from each one.

While the charge against BitMEX could have a short-term bearish implication, in the longer term, Boyapati said a recovery is likely. He said:

“The Bitcoin market has always reacted negatively to major exchange issues or government confiscations. Historically this has always presented a great buying opportunity for Bitcoin. The Department of Justice action against BitMEX will be no different.”

For most of August and September, the $10,500 level has acted as a strong level of support. Bitcoin dropped below it briefly at times but quickly rebounded above it and this shows traders are confident that Bitcoin price will be higher in the future.

Currently, traders are suggesting that the short-term trend of Bitcoin remains cautious but neutral in the medium term. Cryptocurrency trader Cantering Clark wrote:

“In the near term, I think this presents some great two-way trade opportunities. Ultimately, a week from now, it’s water under the bridge. This place has a short-term attention span and is quick to react.”

Michael van de Poppe, a full-time trader at the Amsterdam Stock Exchange, echoed a similar point of view. He stated:

“People are responding: ‘Don’t you know about the Bitmex news?’ Yeah, I do know. I also know about the tons of hacks that occurred on cryptocurrency exchanges, which became ‘the’ reason for a drop. I trade levels. News is 99% after due to inside info.”

At the time of writing, Bitcoin price continues to trade within a symmetrical triangle and the $10,500 level is holding as support. For traders who focus on support / resistance levels, $10,200 is an important price to watch.

If the price were to break below this level, many traders still expect the $10,000-$9,800 range to hold as support as buyers excitedly purchased dips to this level all throughout September.

Bitcoin Closes on $12K But a Wall of Sell Orders Awaits: Analyst

Will bitcoin surge past $12,000? Here are triggers that could drive its rally in future

Bitcoin: A matter of perception