Baker-Hughes Rig Count Comes In At 221

The Swedish Krona’s exploits as one of the strongest currencies is being put to a short-term test which is challenging traders.

The USD/SEK has seen a bullish trend emerge which started in earning on the 1st of September. After hitting important support levels near the 8.60000 junctures, the forex pair has incrementally experienced a higher trend. Not so coincidentally this bullish trend correlates rather well to the cautious behavior which has developed on European and American equity indices since the first of the month.

Interestingly, this is the last day of trading for September and as the month finishes the question speculators will be asking is if risk appetite will reemerge with robust momentum near term. The answer will probably produce mixed opinions and perhaps mixed results during October for equity indices. The Swedish Krona has been one of the strongest currencies in the world since late March and its current value has far exceeded it pre-coronavirus price action of December 2020 until late February 2021.

The USD/SEK is challenging values the forex pair had in January of 2019. The Swedish Krona’s sudden bullish trend the past month therefore should be considered skeptically. While it may prove prudent to believe the short term will continue to test higher values, resistance technically may also be presumed to be ready to fight back.

The USD/SEK is now treading water last traded in July as resistance levels are put to the test.  The 9.00000 is an important psychological inflection point for traders, but true short-term resistance looks to be more adequate around the 9.04000 level and if that proves vulnerable the next test higher could be the 9.08600 mark. The USD/SEK can move fast when traded because of its magnified incremental values. If the 9.10000 level is broken higher, than the critical target for the USD/SEK would be the 9.17000 vicinity.

However, traders with the ability to practice more patience and manage their leverage effectively may actually believe a selling opportunity exists within the USD/SEK. The mid-term range has been demonstrably strong for bearish momentum and speculators may believe that this trend will reignite sometime soon.

It would be helpful for global risk appetite to show signs of life and feed into optimism surrounding the ability of the Swedish Krona to get stronger. However, it may need only a small risk appetite push, and near term, the USD/SEK may produce some downside selling momentum for traders who want to pursue selling the forex pair.

Trade long or short with

any of our selected brokers

with any of our selected brokers 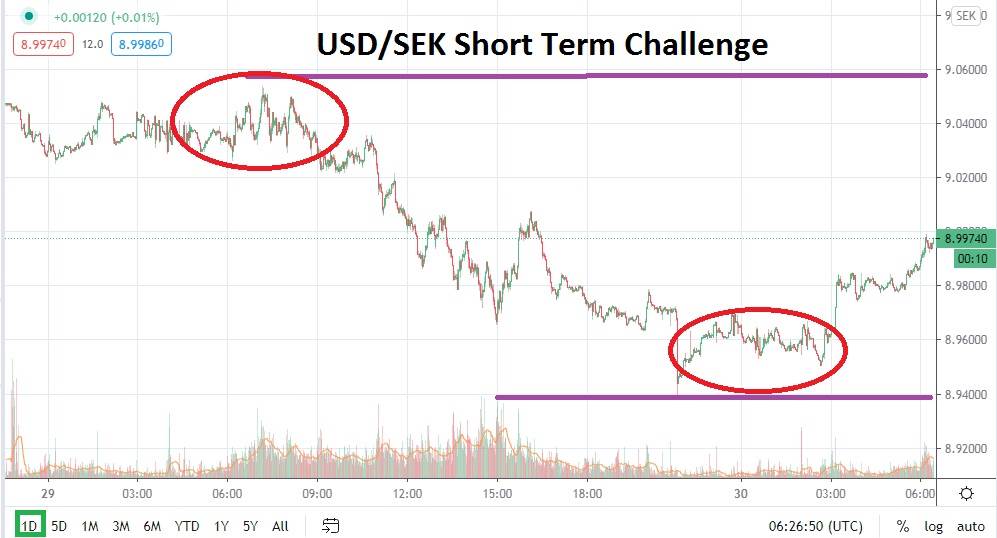 Baker-Hughes Rig Count Comes In At 221

How to Become A Successful Forex Trader

Sentiment Is Risk-Off Ahead Of U.S. Election